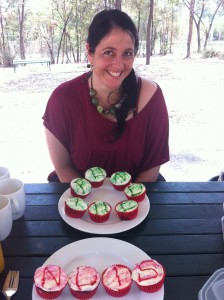 Let’s fund the NDIS and have your cupcake too.

“How selfish of me to want to spend money that I’m working hard for on myself! To put clothes on my back, food in my mouth and a few luxuries like a morning coffee. Come on Australia, I know you share my concerns.”

And I don’t shy from enjoying the fancier things in life either. I’m not a saint. Last week I spent $250 on some jewellery. This week I bought a new TV. On Sunday I bought my Dad a lovely birthday present. On Monday I had a coffee. Tomorrow I’ve got a specialist appointment.

But – despite all this luxury spending – I’m someone who knows that disability can happen to anyone – whether acquired or at time of birth. And that Australia needs to fund this immediately.

Last year I met a conservative Liberal Party member who had been a high flying media executive for most of his life. He was fit and healthy until one day he was running across his timber floors at home and slipped and fell. He broke his spine and now gets around in a wheelchair and relies on a community service to assist (e.g. shower and clothe) him each day. He told me how sometimes, if the shifts got confused, he’d be left in bed without a shower or the opportunity to get up and out of bed.

I went to work with a young woman in her 20s who, when her and her partner when on a honeymoon in London, he fell down some stairs, acquired a brain injury and, as he now has an intellectual and physical disability, she has been caring for him ever since.

I have a beautiful branch member in her early 20s who gets around in a wheelchair. I met Bridget for the first time in 2010 at the Yeronga polling booth where she was handing out ‘how to vote cards’ for me. She said to me ‘What is the Greens policy on the NDIS?’ As it was just a new and vague concept at the time, she explained what it was to me. I said to her ‘Well that certainly sounds like something sensible that the Greens would support’. The Greens now support the NDIS – not just IN PRINCIPLE – but the FUNDING of it.

Bridget is a volunteer administrator of my campaign Facebook page.

I also live with one of my best mates, the lovely Alex, who gets around on sticks and uses a wheelchair to get from place to place outside. Alex loves coffee. We also drink lots of tea together. She feeds my animals practically every night. I take the bin out. We have D&Ms at midnight. She watches me cry while watching something horrific on Four Corners. We laugh raucously often.

Funding the NDIS is not just about better supporting these people I’ve randomly lumped together just because they live with a disability.

The NDIS is for those like Matt who seem to think that disability will never happen to them. Nor their loved one.

Let’s consider funding the NDIS by increasing the mining tax. Let’s at least consider the government’s proposal. Let’s just bloody fund the genius idea one way or another.

No-one’s going to make you give up your morning coffee.