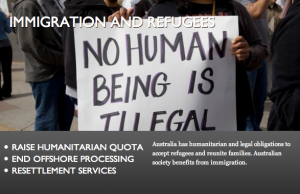 And then Joe Hockey pipes up with something that sounds reasonable about giving asylum seekers the right to work, but then buggers that up by framing it around the value of temporary protection visas – a policy of cruel instability that strikes fear into my heart.

These are colleagues Moreton LNP candidate Malcolm Cole is standing alongside! The people in Moreton deserve 100 times better than this!

People seeking asylum must be treated with compassion and dignity not treating as criminals.

As a Greens in Moreton I want asylum seekers to have work rights, and access to social security, legal representation, interpreters, health services, case management, and appropriate education for the duration of their assessment.

Whether asylum seekers are adults, teenagers, children and no matter whether they arrive on their own or in a family group, we should be supporting them to recover from their experience of traumatic persecution back home, not locking them up and certainly not giving them a set of ‘behavioural protocols’ that frame then as villains rather than the courageous folk they actually are.