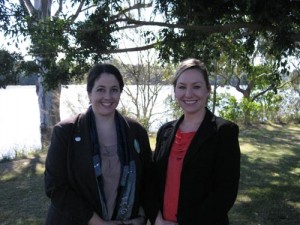 The Queensland Greens have selected the high profile and experienced Elissa Jenkins to contest the electorate of Moreton, Queensland’s most marginal Federal seat.

In 2010 The Greens received one of their largest swings in Moreton, receiving 16 per cent of the primary vote. If this swing continues, the seat could go to The Greens in 2013.

One major issue Ms Jenkins is set to raise during her campaign is the plan to expand Archerfield Airport. She shares community concerns that it will have “serious detrimental effects” on local residents and businesses.

The expansion plan anticipates aircraft capable of carrying up to 80 passengers operating from the airport up to 24 times per day, including 12 arrivals and 12 departures.

“This is a residential suburb and the air and noise pollution plus the extra road traffic will have dire consequences for those of us living here,” Ms Jenkins said.

“Federal Labor steam-rolled the airport expansion decision despite serious concerns of local residents. Where was the ALP’s local Member, Graham Perrett when we needed him?”

She said Brisbane Airport Corporation’s inability this week to cope with traffic to accommodate its upgrade had already seen an increase in the number of charter operators wanting to conduct fly-in, fly-out services at Archerfield Airport.

“We may well have commercial flights landing at Archerfield and travellers from regional centres commuting by road across the city to connecting flights at Brisbane Airport. This is plainly ridiculous,” she said.

Labor was repeating mistakes made with Coolangatta Airport and others, she said.

Ms Jenkins will campaign against the same major opponents as in the 2010 election – the ALP’s Graham Perrett and the LNP’s Malcolm Cole, making the campaign especially interesting.

She works in the renewable energy sector and works closely with Federal Greens’ Senators in her role as a board director of The Green Institute. She also liaises with Global Greens Party members, supporters and politicians from around the world.

She lives in Moorooka and has strong roots in the Moreton electorate, attending Corinda State High and graduating from Griffith University with a Master of Arts.