Go ahead, underestimate me 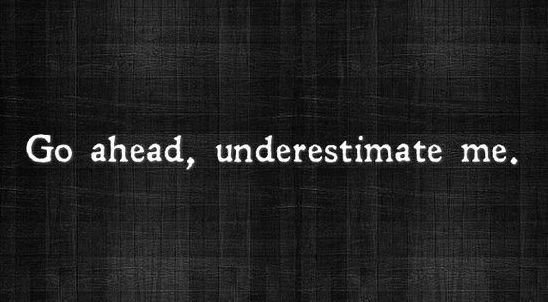 I went on a ‘tour’ of a ‘values based’ co-working space today in Manhattan, New York City and it was all very awkward and odd.

It was a space apparently designed for entrepreneurs, activists, creatives, and professionals taking action to drive positive social and environmental change. It’s part of a global network of hubs designed for this.

Even though my husband and I each booked a tour in advance, they stared at us blankly when we arrived. But we did get a tour of sorts I guess.

Unfortunately, there was no attempt at connection or warmth from the guide. She asked me what I ‘did’, but never once asked me exactly what I was going to be working on nor even acted remotely interested. In fact, I left feeling like a complete freak.

I won’t be going back.

The clincher to seal that deal, aside from the guide not telling us anything at all about the space and me having to ask a million questions which were met with one word answers, was her telling us to wait and “I’ll be back in a sec. I just have to run downstairs” and then she never came back.

We eventually found her at the front counter 10 minutes later.

It was like a really bad blind date gone wrong. And I was ingloriously dumped.

I am so gutted as I was so insanely excited about attending this co-working space. I remember reading that one of the participants there received investment funds for their social enterprise project from Leonardo Di Caprio. Now I’m not looking for that kind of thing at all, but it sounded pretty damn cool.

My husband and I went to a bar afterwards and debriefed over Original Sin Hard Cider (that’s my product placement for the day because it’s the best cider in the world that I can only enjoy in New York City).

I raised a lot of things with Brett to try to figure out in my head why the encounter was so awkward.

One of the things I said to Brett ‘Is it because I am old, fat and awkward?’ And he said to me “I tried to dress cool. I wore my cons.”

Of course I know those issues are our issues and we totally own them. I mean no-one can MAKE you feel that way. I get that.

The thing is, this experience today is just so completely the opposite to how I feel when I attended my hometown co-working space in Ipswich, Queensland, Firestation 101.

The leader there Chad is amazing, relaxed, warm and welcoming. I am sure he realised pretty early on that I’m a bit ‘different’, but he lets me be me – as does every other participant there.

I have never once felt like a misfit out at Firestation 101, not even close. I mean, we’re talking about social innovators here. Our hearts bleed, remember!

I only had the opportunity to attend Firestation 101 for 6 weeks before coming to live here for three months and they’re keen to hear back about my time in co-working spaces here, but going by the space I experienced today, New York has a lot to learn from Firestation 101.

Ipswich City VS New York City and Ippy is winning. Who’d a thunk it?

After a few drinkies Brett has now said “It’s great to be in love. Who are we? What are we doing here in New York? This is amazing!”

I am going to try Centre For Social Innovation next. Not going to give up yet. I’ve got a world to change, here.

Love, hope and ambition. And all that jazz…