When did it become OK to be mean? 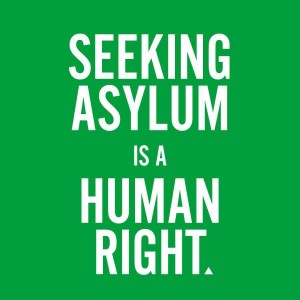 These guys call themselves ‘conservatives’?? I don’t want progressive policy in the area of refugees!!

I simply want to revert back to the 1970s when asylum seekers were processed in the Australian community in open reception centres.

And so called ‘border security’ was just as important then as it is now, so don’t give me that utterly flawed ‘times have changed’ baloney.

My earliest childhood memory is of hanging out in semi daycare mode at Wacol Migrant Camp with refugees and migrants (no distinction!). Here my mother (an Italian migrant herself) taught English.

Many of Mum’s students during that wave were Vietnamese ‘boat people’ so, after many a Vietnamese meal, I actually don’t have any recollection of learning how to use chopsticks. I’ve always known how. How’s that for intercultural inclusion?

Individuals and families with kids from inside and from outside the centres were allowed to come and go, but the nature of the centres – while I’m sure they had their fair share of challenges at the time – were based on providing food, shelter, English classes and generally safe settlement opportunities for those new to Australia; those who were fleeing danger in their homelands.

In fact, my British side – my Dad, Aunty, Nana and Pop – stayed in Wacol Migrant Camp when they migrated as ten pound poms in the 1960s.

I assume the Wacol Migrant Centre during the Vietnam era was simply a better resourced extension of this. There’s actually a wonderful book that was written about the Centre with people from all walks of life sharing their stories. Perhaps it should become compulsory reading for every federal candidate and Australian parliamentarian and become part of the school syllabus.

Why? Because this constant promotion of fear and lack of acceptance of the challenges people face in their own countries prior to risking their lives to travel to our bloody strange country (strange to them) is really ratttling me. Health checks and then community compassion, people. It’s NOT THAT HARD!!! IT’S ACTUALLY EASIER!

It’s also way cheaper on the taxpayer (should that be your concern)!!!

There is another way. It’s been done before. Many have benefited from it. They’ve become upstanding members of the community.

The majority of people who arrive by boat are found to be genuine refugees and are settled in Australia. If your genuine concern about border security is ‘economic migrants’ cheating pathways then what’s the harm is saving a few bucks and processing these people in the community rather than spending billions on offshore (and now out of country) processing centres?

God I HATE the word ‘processing’. Sounds like we’re talking about cattle. We’re not. We’re talking about people, with loved ones and families and hearts and minds and dreams and passions … just like you. What is it that makes you feel they are so fundamentally different from you or me?

I am multicultural Australia. You are too.

If your concern (and it’s gutting) is to reduce the number of people drowning at sea, this policy won’t ‘stop the boats’. It’ll just divert our country’s international obligation and make it another country’s obligation; a country much less financially capable of supporting these vulnerable people.

When did it become OK to be mean?

2 thoughts on “When did it become OK to be mean?”