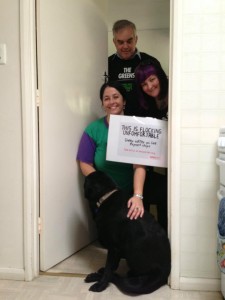 This morning members of the Yeerongpilly Greens came together to support WSPA’s Cram Challenge and demand Moreton MP Graham Perrett call on his Labor government to end live exports.

According to WSPA, three sheep can be transported on live export ships in a space on average of only 1 x 1 metre. Ship motion, high levels of ammonia, cramped conditions, starvation, disease, noise and vibration are all factors that cause suffering and stress. Many thousands of animals die on board each year.

Many Australians, from mums to meatworkers agree this is a cruel and unacceptable practice. This morning the local Yeerongpilly Greens, including myself – Greens Candidate for Moreton – came together to highlight the cruelty of long distance transport by taking part in the WSPA’s CRAM CHALLENGE.

Greens members crammed into a small space then captured the moment to support the End Live Exports campaign and highlight to Labor MP Graham Perrett that this is an issue close to the heart of the Moreton community.

On Tuesday the Australian Greens released a position paper identifying five key issues the government must address to provide a more economically robust and humane alternative to the live exports trade, in the lead up to the important last Government caucus meeting of the year where live exports has been identified as a key issue by some Labor MPs.

In addition to crammed conditions, upon arrival overseas, Australian animals are no longer under our protection. Many animals will still be slaughtered while fully conscious.

Local jobs and the Australian economy also suffers. Over 1000 meat workers lost their jobs in 2010. The Meat Workers Union claims this was mainly due to livestock shortages, which were exacerbated by the live export trade and is calling for a phase out of the trade by 2016.

To join The Greens visit http://qld.greens.org.au/qld/join

A big thanks to Danielle for the wonderful suggestion!

Special shout out to my dog Pacey who has just been diagnosed with a tennis ball size tumour in his chest. 🙁 Love you my dog-faced boy.